Globally, SMA are the dominant inverter manufacturer. They have a powerful presence in residential and commercial solar but importantly, they are the king of utility scale solar installations.

SMA is the benchmark inverter and perceived universally as the best and most reliable. Even with increased competition, SMA continues to rule as the inverter with the longest lifespan and unquestionable reliability. EnviroGroup have systems installed over a decade ago with early Sunny Boys and Tripowers fro SMA which are still powering on quite happily and show no signs of giving the game away. 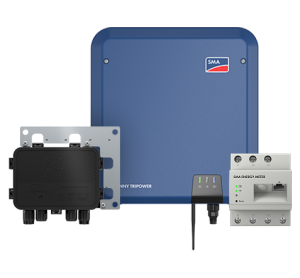 The new range of Sunny Boys have SMA’s rock-solid reliability as well as built in WiFi, Optitrac shade management and SunnyPortal for monitoring. Their reliability is further reflected in the SMA Smart Connected programme where your inverter is monitored by SMA after you’ve registered on SunnyPortal and can discover and respond to faults even before you know it.

In 2016, SMA bought a large stake in Tigo Energy who make a range of solar optimiser products. This partnership allowed SMA to incorporate into its inverters the TS4-R module technology which provides the perfect interface with the Tigo optimizer hardware enabling flexible shade management in our PV designs.

Three of the most popular models offered by SMA are: