With each generation of solar technology comes new ways to create, store and use your very own renewable energy. As electric cars become more popular, solar power becomes the logical choice to reduce running costs and reduce contribution to green house gas emissions.

Based on a quiet street in a suburban Melbourne, the owner of this home approached EnviroGroup wanting:

The brief was also made challenging by a complex roof design and shading issues by a neighbouring gum tree. EnviroGroup was able to design, supply and install a solution that fit the brief while using some of the latest solar and battery technology available.

The charging requirements of both electric cars ensured that a larger than average solar power system would be needed. A high energy yield Yingli Panda solar panel using advanced N-Type cell technology was chosen to gain the maximum solar energy from the available roof space. These solar panels were matched with Generation 4 Enphase M250 micro inverters to best suit the many different roof angles and shading at different times of the day. The Enphase Enlighten online monitoring software then provides real time feedback about the performance of the system to both the home owner and EnviroGroup ntechnical support.

The battery storage system faced two design challenges. Firstly, one of the electric car chargers could draw significant amounts of electricity very quickly. Special high performance Sonnenschien Lithium batteries were chosen to provide fast discharging and long battery life. Secondly the battery inverters also had to withstand these high currents and over 3 separate phases. The Selectronic SP Pro was chosen as it has one of the highest known load capacities and a reputation for reliability. 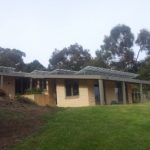 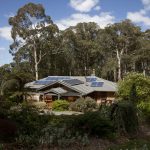