Almost every incoming enquiry we receive about solar includes a request for a discussion on batteries. And almost every discussion that follows includes the phrase “…when battery prices come down.” It’s a reasonable thing to say since batteries are still pretty expensive. Now, if you are a person working with the task of selling batteries and have been doing it for some time, then it’s easy for there to be a big disconnect between the customer’s expectations and yours. For most customers, this discussion is the first time they’ve formally had contact with a professional on the topic but if you’ve been working on the solarcoaster for some time, you’ve seen a lot of changes in battery tech.

Way back in the mists of time, say 2013, batteries for houses were just starting to emerge from banks of flooded lead-acid 2V cells in a separate brick outhouse to the first modular almost plug-and-play systems. Then came Tesla. The promise of the first Powerwall at $US3500 was too much and the the industry went bonkers for batteries. Now, Tesla weren’t the only company working on this kind of tech but they were the first to dive off the blocks and within a short time several other companies who were developing their own modular products, went to market. It was ‘game on’.

Within five years, the battery market has developed at a frenetic pace. It’s not like the technology was new or that it couldn’t be done decades earlier. What was needed was for a battery chemistry that made sense when powering a house. Lithium Ion is a catch-all term for a whole bunch of chemistries that has been around for years but the dominant chemistry today is Lithium Ferro-phosphate or LiFePO3 which gives a nice flat discharge curve and is somewhat immune to large temperature changes. There are others, but this one is the current king.
Besides the physical technology and probably more important, is the regulatory landscape. For batteries to be viable, you need to be able to connect them to the network and this means having the distributors on board. Now, for the uninitiated, the distributors are not the energy retailers. Distributors are companies, private or public, that look after the physical network comprising the poles and wires and everything that brings energy from the generators to your house. It’s the retailers that then take all your money. Distributors are concerned with making sure the energy is reliable and is transmitted, they don’t bill you. So if you want to connect anything up to their network, it’s these guys you need to please. For a battery market to thrive, the distributors need to be on board. These days they are. They see the potential in connecting thousands of batteries up to the grid but we’ll leave that part of the story to another time.
So today, in 2020, we have a ready distributor network and a decent chemistry for the battery itself. The control electronics are easy. They could have been sorted in the ’70’s. So why aren’t battery prices cheaper.

And this is why there is this disconnect between the sales consultant and the customer. The battery price points have not changes all that much but what you get for the money is significantly improved from 5 years ago. So, for $12k in 2013 you might have bought a BYD battery module the size of a medium wardrobe with 4kWh capacity but in 2020 $12k buys you a Redback slimline plug and play battery module with 9.6kWh capacity and that’s installed! Not only that, but you get WiFi enabled monitoring and a 20 year lifespan. So in relative terms, you get soooo much more for your battery dollar.

It could be a lot cheaper. The electronics themselves are fairly cheap but it’s the battery that adds the big costs and lithium based batteries are subject to the basic commodity price of lithium. Lithium for battery use is not finite and needs to be mined and the supply of this commodity has increased to keep up with demand resulting in a downward trend in price since 2018 but this can’t hold. Eventually lithium will dry up and when the uptake of electric cars becomes exponential, which it will within 10 years, lithium prices will skyrocket. There’s also the hydrogen variable which will affect the market and other types of storage tech like supercapacitors which may prove to be a better long term option for household storage. This means that it is impossible to predict where battery module prices will go but what we can safely say is that what you get for your dollar will be so much more.

How does this affect your decision on batteries? Well, if you look at batteries from a purely financial position, they don’t make much sense. It’s improving, but you are still looking at 8-10 years ROI. That’s not terrible but not exciting, either. If you want blackout protection, you can have it. You can be that house in the street still lit up when everyone else is in the dark but, realistically, that happens once every couple of years in Melbourne so you decide whether it’s worth the cost.
The people buying batteries from us now are cashed-up early adopters who want the latest technology on their houses. The financial case is irrelevant. They want batteries because they can. It’s the early adopters who set the pace and we are selling a lot of batteries right now. Our advice to those who call us is consistent. Just get your solar up on the roof and then we’ll see. Once we have solar we can look at the result and give you a proper assessment based on fact once we have some billing data. Most people then don’t bother but if you are one of those people setting up the ultimate energy efficient house, then the technology has been here for a while and the price of batteries has never been better. 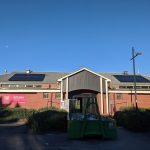