A rather large percentage of EnviroGroup’s residential (and commercial) quote requests is for new houses either under construction or just before work starts. Whilst we love being involved in supplying renewable energy solutions to exciting new buildings, we keep running up against the same problems which are easily solved right at the planning stage.

For all the times we are brought into the process, it is rarely the actual home owner that is involved with us. More often it is the builder or the architect and generally our involvement is looked upon as an afterthought. For the builder or their electrical contractor, the solar installers are more of an annoyance interrupting their schedules. This attitude is changing but more with the architect or the home-owner rather than the project manager. It is common to have plans sent through to us with panels laid out by the designer in a cursory manner on the roofing diagram and almost always never with any accompanying information about where the inverter shall go, or how the cable will run. They are basically asking us to design it ourselves, which is great, but ideally we should be consulted well before the plans are even drawn up so that we are not second-guessing our designs at the time of installation.

Solar should be considered more than a bolt-on accessory that can be added after the main work is done. Architects have been designing houses with careful consideration to passive solar performance, thermal efficiency and passive lighting for years but a house is much more than a passive element of its environment. A house is also a generator and soon it will become a micro-substation for the grid as the distributed network takes over from the central power stations. A house will also be an inward and outward revenue stream for storage and generated power. Solar and battery systems are significant investments and should not be thought of as an afterthought. The designer should create designs that make the connection between active and passive efficiency as fluid as possible and this means taking into account the placement of the key elements of the active system.

Roof structures tend to get the least amount of attention. They simply form themselves up once the rest of the building takes shape and more often than not, fail to accommodate the solar generator. If the design started with the idea of the house as a generator, then the roof takes primary importance. The orientation, pitch and azimuth carefully designed can allow large arrays with the least number of obstructions which means we can design an active energy system that will not only power the whole house but also future needs and positive energy revenue.

Another aspect of new build quoting is the long lead times from plan to lockup stage. It is not possible to accurately quote on a solar system that won’t be installed for nearly a year and if that lead time crosses over the new year then the number of available STCs drops, increasing the price of the system. Panels also change and if you quote for one panel in January then you can be certain that by September, it will be obsolete or unavailable. Fortunately, the industry’s average pricing is pretty stable so a quote may only vary by 10% over 6 months but it is something that builders and project managers in particular need to understand.

We would also like to be installing the system when the main electrical contractors are roughing-in the house wiring and a meterbox has been installed. The ideal time is just prior to the sheeting up of the interior walls. Access to wall cavities is important and having the electrical contractors present means we can collaborate to provide the best installation we can. A perfect house design would include a riser from the meterbox to the roof and a pathway for wiring to go from the meterbox to where the utilities will be placed.

In the last twelve months, we have met with architects, builders, town planners and councils to really analyze the needs of a modern house so we know that there is more care and attention being taken to maximize the potential of the structure. Our advice is that if you are planning to build your next house, call us first with your ideas. Our consultants will make sure you are prepared with all the information you need to optimize the efficiency of you building but to also set yourself up for a much more seamless construction process where the pitfalls are planned for well in advance. Our advice is free and that conversation alone could save you serious dollars downstream. Most of all, don’t think of your solar, batteries or hot water as bolted-on appliances but as in integral component of a home that has been designed to take care of you. 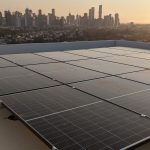