The chart below is a live breakdown of the energy mix of the National Energy Market (NEM) across all states in Australia. It shows the composition of energy generation sources at the current Australian Eastern time. If you are looking at this after dark, you will notice that the percentage of solar as a source is non-existent. Don’t be depressed by this, have a look at it again at midday and the mix will be different.
It is interesting to notice the differences between each state. These differences come about because of a number of factors such as landscape but mostly because of government policy. Take a look at South Australia with its massive wind capacity and no coal. This is the result of the state’s commitment to renewable energy. Then look at Western Australia and NSW with enormous coal reserves but still significant solar capacity. Victoria has a very diverse mix which is the result of government activity and interest.

What is significant is the increase in wind and solar as a percentage of the total, at least for some states. This is variable energy and is not stable so there needs to be a part of the mix that is capable of smoothing that volatility in generation so that the grid is not destroyed as a result. Obviously, solar varies throughout the day and doesn’t work at night, and wind generation varies with the wind. This causes great fluctuations in the energy generated and this may or may not match up with the load at the time of generation. For instance, you might remember a news story that went around social media and renewables journals that claimed:

Well, it’s true: it did. At 3am in the morning when nobody was using it. Fortunately, they sold off the power to other countries but the fact is that wind generation is unpredictable and is not a solution by itself. If there were a storage solution of a sufficient scale to capture all that excess energy then it wouldn’t matter when the generation occurred but there isn’t. Even the Tesla-built Hornsdale Plant in South Australa is only useful for smoothing the existing grid. In other words, filling in the peaks and troughs, a job it does very well. What it doesn’t do is capture enormous volumes of energy from wildly running wind farms and keep it for a rainy day and given the size of national and state loads, it’s unlikely storage of that scale will ever be viable. So, it’s the grid that has to change. Our current network is designed to carry energy from coal and gas generators positioned near the fuel source and deliver that energy over long distances to where the demand is highest. It’s not designed to accommodate the injection of alternative power generators at other points along the transmission line. Of course, all the distributors know this and the grid has started its evolution from central to distributed network where interconnectivity is the key. The transition will allow for the large number of great and small generators and storage systems to talk to each other and provide energy where it is needed.

At the moment, your household electricity supply is one tiny branch of the network that receives energy as you demand it. It’s a one-way trip. Your meter records it and you pay money for the privilege. Add rooftop solar and we reprogramme your meter so now it’s a two way trip. You generate energy and you consume energy. If you need more than you generate it comes in just like before and you get billed. Generate too much with your solar and it goes back to the grid and they pay you for it. It’s much better but you house is still one tiny twig on a very complex branch. With the new decentralized national network, you system will connect to it with a lot more intelligence, particularly if you have a battery system. Your household powerplant will know when and where to deliver power back to the network and will be optimized to give the best possible outcome for you and the nation. It’s where we’re heading and quickly. If you don’t have a solar system, you can’t play in this game so you will be forever at the mercy of the network. It’s better to be in the game than out so if you haven’t got solar, get it. 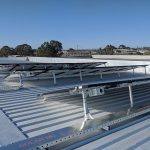 Solar History – Some guys and a shed the beginning of the ATABusiness, Community, Industry News